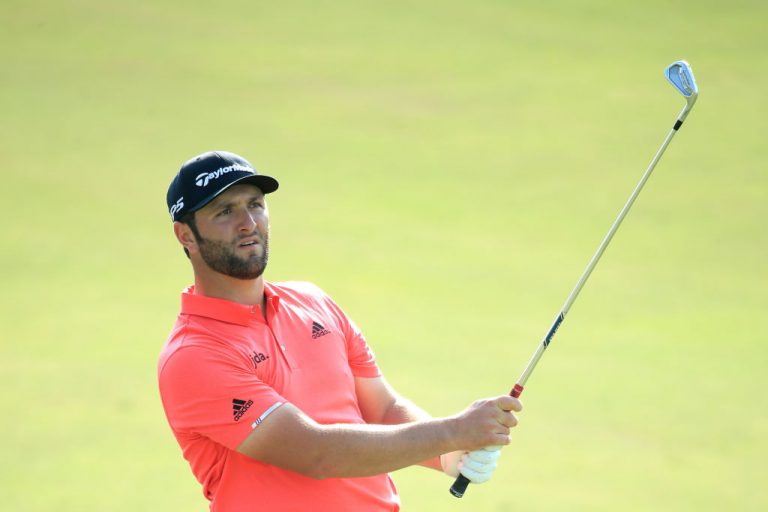 Jon Rahm is a 26-year-old professional Spanish golfer who currently holds a world-ranking of 2nd place on the 2021 PGA Tour. Born on November 26th, 1994, in Barrika, Spain, he rose to world no 1 golf ranks when he won at the 2020 Memorial Tournament at the Muirfield Village Golf Club in Dublin, Ohio.

Jon Rahm is also a graduate of the same college as Phil Mickelson at the Arizona State University where he played with Odyssey and Callaway golf clubs and won 11 tournaments. He’s one of the few players to hold a #1 ranking for 60 weeks in the World Amateur Golf Ranking. But the course record belongs to Tiger Woods who spent 281 consecutive weeks at world number one with 683 weeks in total.

Whilst Jon Rahm has a way to go to catch Tiger Woods’ world records, he is at the top of his game on the 2021 PGA Tour and is currently right behind the number one golfer in the world, Dustin Johnson. Read on to discover more about the equipment that Jon Rahm has in the bag.

Jon Rahm has won six championships on the European Tour, five PGA Tour events, and is ranked currently 2nd in the world on the 2021 PGA Tour. Jon Rahm WITB 2020 saw some familiar TaylorMade clubs and irons in the bag; however, he has switched to Callaway equipment for the 2021 season.

According to Getty Images online and the website Golfwrx, here’s what Rahm had in his 2020 bag:

What Clubs Does Jon Rahm Use?

Currently in 2021 with his new sponsorship deal, he has been going through the testing process trying a variety of Callaway Clubs. From the Callaway Apex TCB 4PW with Project X 6.6 Shafts to the Callaway Proto Triple Diamond Wedges with jaws forged JPN 52 and the Callaway Mavrik Sub Zero Driver, Jon Rahm WITB 2021 is Callaway equipped.

The current number two player in the world is playing with advanced equipment in his bag and a new home at Callaway when he signed a deal back in Januaray of 2021. On his Twitter account, he has tweeted about how much he loves the loft of the Callaway Jaws Forged JPN wedges and the power of his Callaway Mavrik Sub Zero driver, Odyssey putter, and even his new golf ball, the Chrome Soft X.

Below are three common questions and answers about Jon Rahm WITB 2021:

Q: What Putter Does John Rahm Use?

A: The Odyssey Ten

A: Yes, they’re are used with his Callaway golf clubs.

It’s also apparent that he now favours his new TravisMathew clothing apparel over his former clothing supplied by Adidas.

Collin Morikawa What’s in the Bag? Check it out here!