Dustin Johnson What’s in the Bag? 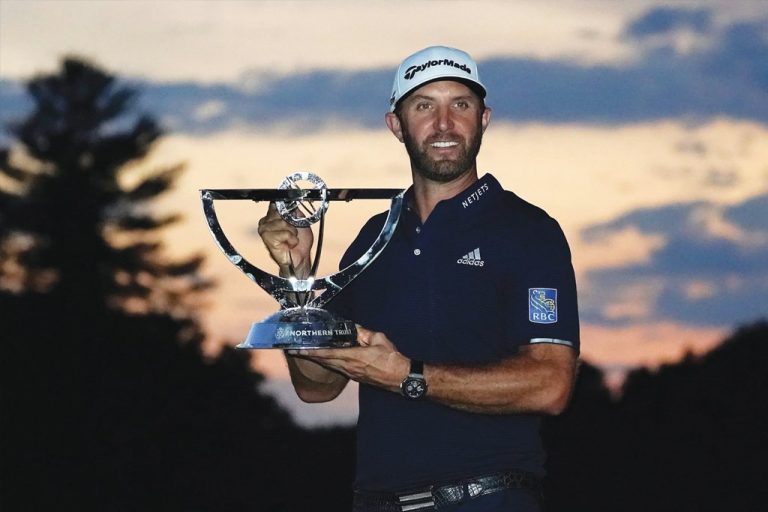 Dustin Hunter Johnson was born on June 22, 1984, in Columbia, South Carolina, and is an American Pro Golfer who currently plays on the PGA Tour. Winning two major championships, Dustin Johnson won the 2016 US Open with a score of 276 and a 4-under par at the Oakmont Country Club.

He also won at the Masters Tournament in 2020 with a 20-under par and score of 268. Johnson is a right-handed swinger who most recently came in 54th in the Workday Championship at the Concession Golf Club on Feb 28, 2021. Despite this dodgy performance, he has won six World Golf Championships with the latter being the Travelers Championship in 2020.

Keep reading to discover more about Dustin Johnson WITB, his achievements on the fairway wood, and interesting facts like how Johnson is the Babe Ruth of long-distance drivers Taylormade from 2008 to 2020, whilst leading in 2015.

Currently, in the bag, the two-time major champion has exchanged his 3-wood for the advanced TaylorMade SIM2 Ti model with twist-face technology, whilst adding two SIM Max rescues to the bag. However, pictures captured on CBS Sports and Getty images show that he also uses a 7-wood and a 3-iron as well as the rescues.

DJ has also been seen hitting the golf ball with a full set of irons from the pitching wedge up to the 3-iron from the TaylorMade P730 DJ Proto series. At the top of the bag, he’s switched two of his wedges for extra wood. All of which, are designed with raw face TaylorMade Milled-Grind 2 models.

Does Johnson Use the Spider Limited Itsy Bitsy Putter?

Unlike his wedges, Taylormade Milled-Grind irons, and SIM Max rescues to Taylormade P730 DJ Proto clubs that stay in the bag, his putter selection has many faces. He was playing with a Spider Tour Mini but switched to the TaylorMade TB1 Truss. However, DJ has been recently pulling a Black TaylorMade Spider limited Itsy out of the bag.

Whilst the putter TaylorMade Spider Limited appears to be his new putter of choice, it is not clear whether he has stopped using the TaylorMade TB1 Truss and Spider Tour Mini. So, what has DJ been carrying in his RBC insignia golf bag over the past two years?

Let’s find out and take a look:

A TaylorMade SIM Max 10.5° with Fujikura-Speeder 661 X shaft and twist face technology. The Fujikura-Speeder 661X is one of the most advanced SIM driver shafts on the market. Making its PGA debut in 1998, new materials in the shafts using Triax Core Technology provide a three-directional graphite woven material on the inner core of the shaft, resulting in increased ball speed and stability.

TaylorMade Spider Itsy Bitsy Limited as of late; whilst the TaylorMade TB1 Truss and Spider Tour Mini still come out of the bag occasionally.

Adidas ZX 8000 Golf Shoes. Designed from the 1984 ZX running shoes, they offer athletes a robust variety of footwear options depending on the type of training or surface being played with golf clubs.

Whilst Dustin Johnson has been seen with a number of Taylormade products on the greens such as TaylorMade Sim2 drivers, irons Taylormade P730 DJ Protos, and Fujikura Ventus Black 8 X (21°) Project X 6.5 shafts, his email address, and RBC sponsored golf bag contains the best irons money can buy in today’s pro golf shops.

Driver TaylorMade: SIM 3-Wood 10.5° with Fujikura-Speeder 661 shaft. The TaylorMade-SIM driver is designed with a robust Inertia Generator and asymmetrical sole design that increases ball speed and aerodynamics during the most vital stage of the golf swing. This is a Speed Injected SIM driver with Fade and Draw air gap ports, reducing air resistance and increasing impact on the golf ball.

TaylorMade-Wedges 52° & 60° Milled-Grind 2 mounted on top of KBS Tour 120S shafts. His TaylorMade wedges 52° and 60° often replace his pitching wedge as he uses it to launch the ball higher into the air but at a controlled and shorter distance. He can often be seen using the 52° wedge when aiming for distances of 75-100 yards.

TaylorMade Spider Itsy Bitsy Limited. His putter TaylorMade Spider Limited Itsy is a lightweight 6061 body combined with stainless steel 304 frame that transfers weight at the extremities, allowing for a higher MOI (4900+) and improved stability. It’s not surprising that DJ loves this seamless top crown with a robust gunmetal finish that offers a better forward roll on the ball.

Adidas ZX 8000 Golf Shoes. Dustin Johnson has worn Adidas golf shoes for years and can be seen swinging the fairway wood with them on.

At large, WITB 2021 for DJ is an arsenal of SIM2 high-tech weapons like the 7-Wood TaylorMade SIM driver and his collection of RBC wedges and irons as well as his trusty putter TaylorMade Spider Limited. 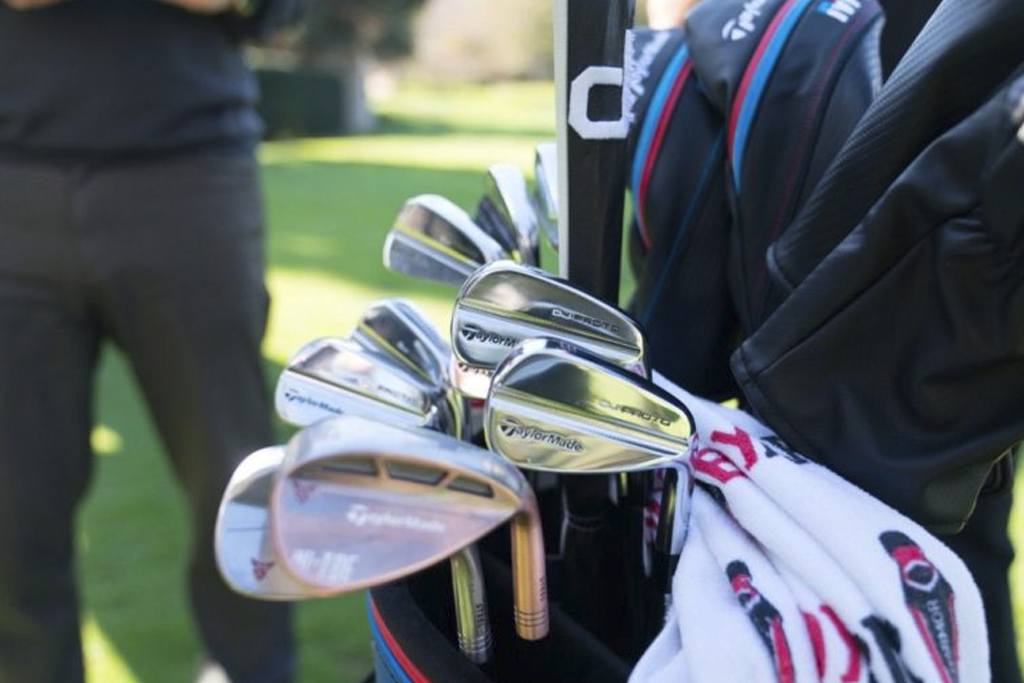 Johnson is a sponsored team driver TaylorMade and a Team RBC Ambassador. His bag has been packed with the best TaylorMade golf irons since he signed a multi-year deal with RBC back in Feb of 2018. His other ambassador teammates include players such as Brooke Henderson, Brandt Snedeker, Matt Kuchar, and Jim Furyk, the Ryder Cup captain.

This robust addition to Team RBC came shortly after the pro driver, Johnson became the world’s #1 golfer in 2017 and held that spot for 64 consecutive weeks, which happens to be the 5th longest run in PGA Tour history.