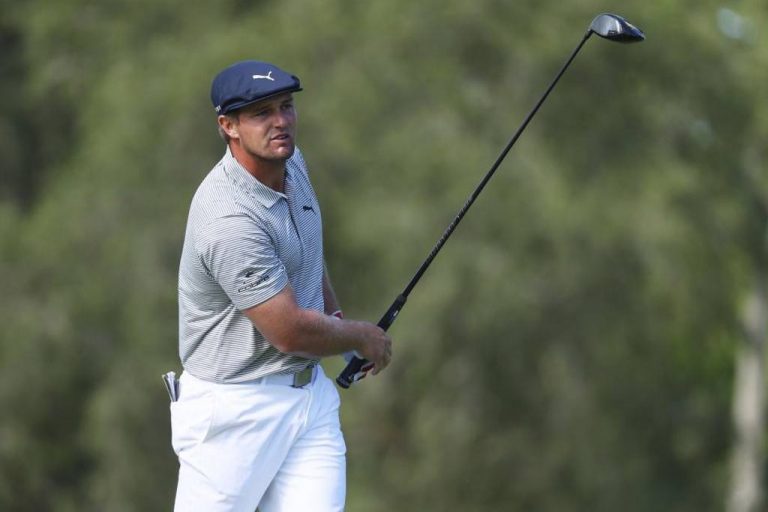 Bryson James DeChambeau was born in Modesto, California, on September 16th in the United States. The US professional golfer has achieved a lot on the golf course, despite using somewhat unconventional tactics. He has won several championships, including the PGA Tour Major Championship in the 2020 U.S. Open.

Dechambeau’s success has been received with mixed reactions due to his tactics. For a man who uses the same length shafts for all his clubs, his success at the US Open and Arnold Palmer Invitational has got heads turning. Thanks to his golf balls and custom driver, he is among the only five players to have won both the NCAA Division 1 Championship and the US Amature in one year.

Read on to get the full details as we unlock Dechambeau’s bag.

What was in Bryson DeChambeau 2020 Bag?

Bryson is the one golfer who carries the most controversial bags of 2020. With the same length iron shafts for all his clubs and the LA Golf BAD-Prototype carbon fiber 75 TX, 43″ shaft for his fairway woods, the bag is quite bizarre.

What to expect in Bryson’s bag:

His driver is the Cobra King LTD-Pro 7.5 degrees is known for distance. He used it throughout 2020 and still has it in his bag for 2021. It is paired with the LA Golf Tour AXS-Blue 6X 45.5′ inch carbon fiber shaft.

In the fairway woods category, Bryson uses the Cobra King-Prototype 10.5 degrees with the LA Golf BAD-Carbon Fibre shaft and the Speedzone Tour 13.5 degrees.

Bryson has been loyal to his wedges for a long time. The wedges; Artisan-Prototype 50 and 52 degrees have been in his bag for the past two years. The 60 and 55-degree wedges are paired with the LA Golf Rebar Proto carbon fiber shafts.

The putter he uses is just as vital to his game as the other clubs. At the famous Arnold Palmer Invitational, he used the Pro C-Series Armlock putter, which was just as instrumental as the Cobra King Forged Tour. For the shaft, he stuck to his Ozik graphite.

For promotional purposes, Bryson uses the Puma shoes, gloves, and other clothing. The loaded bag that has made Bryson a champion is not as complicated as people think. The only special items in the bag are the Cobra King Forged Tour One Length, Cobra King Speedzone Tour shafts, and the Pro C Series Armlock.

Does Bryson DeChambeau Use Same-Length Clubs?

Is Bryson DeChambeau’s Driver the Same Length as His Irons?

Whilst he uses the 7-iron same-length shafts for his irons, wedges and fairway woods, Bryson uses the 47.5 lengths for his drivers. There is a slight difference in the length for the wood and wedge shaft from the driver one.

Does Bryson DeChambeau Use One-Length Wedges?

As mentioned, Bryson uses the 7-iron length for the wedges and irons. This helps bring a more consistent swing on the irons and wedges.

Why Does Bryson DeChambeau Use the LA-Golf Bad Prototype?

Bryson has been a loyal Cobra King customer for several years now. His loyalty to the brand has seen him use the LA Golf Bad Prototype 80 TX shaft, which works well with the clubs. His fairways are made up of the Cobra King Prototype-B 10.5˚ with LA Golf BAD Prototype-70 TX paired with the SZ One-Length.

Bryson DeChambeau WITB for 2021 has not changed much as compared to his 2020 bag. He has retained his Cobra king relationship with his bag loaded with their irons and shafts. His 6-wood club has remained, having helped him win the 2020 Championship Winged Foot.

From the Sik Pro C Series putter to the Bad Prototype 80 TX shaft, the bag for Bryson remains one of the heavily loaded in 2021.

Now that you know what’s in his BAG, you can read all about the Bryson DeChambeau Swing in this epic write up HERE!