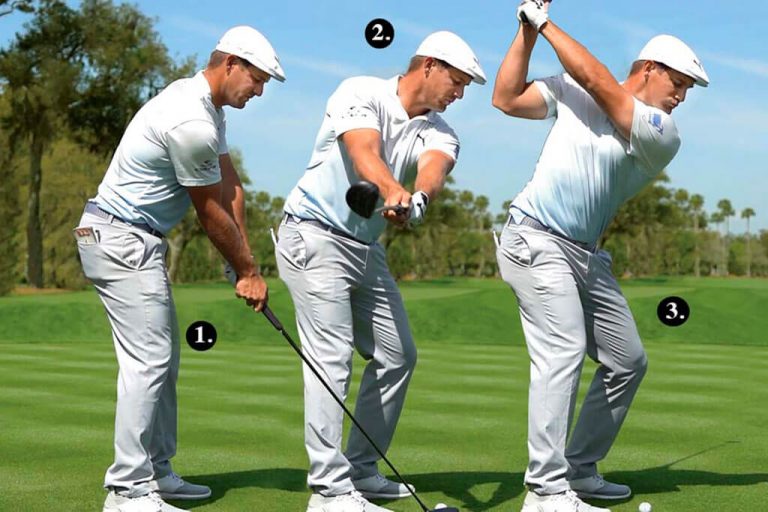 PGA Tour Pro Bryson DeChambeau’s swing by many is called weird, Unorthodox, bizarre, over complicated and not set up for long term golf success. You’ll see a lot of comments on social media about the way he hits it long but with little accuracy, but are these comments true?

However no one can ignore this swing now that Bryson has packed on serious muscle to his physique and driving the ball off the charts with crazy swing speed and serious miles per hour golf ball speed, we all want to know about the golfing machine that is Bryson DeChambeau.

So let’s give some exclusive information, access and story to this golf ball crushing man mountain.

Just a side note, before we discuss how Bryson DeChambeau actually swings the golf club and generates force or how far he hits it with a driver let’s discuss his crazy swing speeds and ball speeds, let’s get a baseline. Just for reference the average player has a swing speed of 93.4 miles per hour and a ball speed of 132.6 miles per hour.

Google will tell you that Bryson DeChambeau has a swing speed of 146.9 miles per hour [mph], but reality that is just a one off crazy range test challenge when he was training his swing speed with long drive champion Kyle Berkshire, which can be seen on video all over youtube. Kyle Berkshire recently hit a 7 iron from the tee box over 300 yards with a ball speed of over 200 mph. Bryson’s average swing speed. [club head speed] is 133.59 mph

With his driver Bryson DeChambeau is generating ball speed on average of 196 miles per hour, even though he regularly hits the ball well over 200 mph ball speeds. His aim is however to hit it over 200 mph more on average, especially when you consider his golf swing has a driving distance off tee box, on average, of 337.8 which lead the PGA Tour season in 2020 for ‘Average Driving Distance’.

When you combine protein shakes and high strength training programs and the physique body of Bryson, with a crazy swing speed, a 48 inch driver (average is 45 inch on tour), the bizarre length irons [7 iron throughout the irons] and a ball speed of nearly 200 mph no wonder other players are looking at his game swing in detail.

Then add Tim tucker to Bryson’s bag of (Yes the master caddie) you have all the things for a golfing partnership dream on the PGA Tour.

The question is; how does all this relate to Tour event performance?

As we all know the physics of swing speed, ball speed, distance and so on means nothing if you can’t hit the driver straight off the tee score well on the golf course during tournament play.

As an example Bryson made the 2020 Augusta Masters Championships look like a par 3 golf course turning complex par 5’s into relatively simple par 4’s. Some of his drives had that much loft they flew over the trees drives missing out dog legs and shorting the course considerably. The members at Augusta masters will have to look at limiting what Bryson can do at the 2021 masters.

So let’s look deeper into his performance to date this season on the PGA Tour.

Putts Per Round ranked #121

So it is evident to see that Bryson’s golf game is all power. His accuracy, sand play and putting are lagging but he still has the most amount of eagles, 3 best scoring average and distance is no1 compared to all players on the PGA Tour. Plus he is this years U.S Open champion. What else will he do this season?

We suggest that most players on tour and around the world would want some of those statistics. 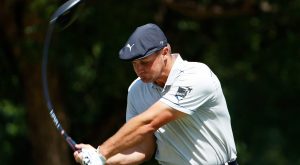 The one-plane, the single plan swing!

It’s the same swing just personal preference to what it is called.

The crazy thing even though it looks more technical the one-plane swing is easier for the average player and ultimately allows the player to hit the ball more consistently.

We all want to become a better ball striker and that is effectively the whole premise behind Bryson’s swing and also the reason he has the same length irons. Sounds crazy right, but he has a 7 iron length shaft in all irons so it’s evidentially important to have different loft and lies to the way conventional golf clubs are set up.

So there are some simple steps to understand.

As much as we want you to understand this swing from this article the best thing you could do is head over to youtube and search videos of the single plane swing. Or if you want to just see Bryson crushing drives off the tee with ridiculous force and a 48 inch driver, Google ‘Bryson DeChambeau swing’.

You can read more about the one plane swing inside golf digest with a subject called Breaking 80 by Jim Hardy. Another notable swing coach is Chris Como Tiger Woods swing coach and other PGA Tour professionals.

How does DeChambeau grip the club?

‘Grip the club in your palm not your fingers’ This is what Bryson told Golf.com many years ago and still stands by this statement.

Research suggests that your hands only have a 10% affect on your swing velocity, so the old though process that you need to grip with your fingers is kind of obsolete. The new thinking is find more fairways and greens and sacrifice a little speed and we all know that is a challenge for most of us.

And this is where Bryson is changing the game of golf! The amount of detail he goes into is phenomenal. He is looking at every minute detail, like changing lofts, lies, lengths, positions etc, to get the most accuracy but also the most speed to make long courses seem short.

“You need all 10 fingers on the club to consistently catch the ball square” again another very simple quote from Bryson, bit makes total sense. The more amateur golfers focus on ball striking and consistency the better their game will get. Once the consistency is there then you can add the power, the speed, the explosiveness. When you combine all the above, the new way, you move into another dimension of golf.

A side note: Bryson uses thick grips on all clubs. His particular choice is the Jumbomax golf grips that have some weigh to them also. He beleives the thicker grips enable him to spend less gripping the club and use more energy swinging the club.

Thanks to Golf.com for their article on how Bryson DeChambeau coaches to fastest swing speed

That statement definitely challenges conventional ways to think about the golf shaft.

Who is Mike though? Coach Mike Schy is the long time coach of Bryson, like a father figure, that has been there from virtually the start. From 2015 NCCA Men’s Individual Champion and 2015, U.S. Amateur Champion and through to his first major win at the U.S Open

Bryson’s Swing can be heavily compared to the swing of all time great golfer Ben Hogan when you break it down part by part. Particularly where the right elbow reaches it maximum height before the backswing has been completed whilst he starts to move down in the swing as the club continues to swing back.

No one on tour swings a golf club like this, but is it about time you made a change to your swing, cut you irons down to one length and followed swing instruction from Coach Mike Schy. We advise you head to Youtube and tweak a few thing, use a few tricks and challenge yourself from the many video series you can watch from free.

Other golfers with great golf swings, with video all over Google, to observe for a challenge are – Matthew Wolff and masters hopeful brooks Koepka!

Now that you know all about his swing, you are most probably interested in knowing what is in Bryson DeChambeau’s bag? Do not miss this epic write up on exactly what clubs and equipment he has in his bag, just click here and enjoy!